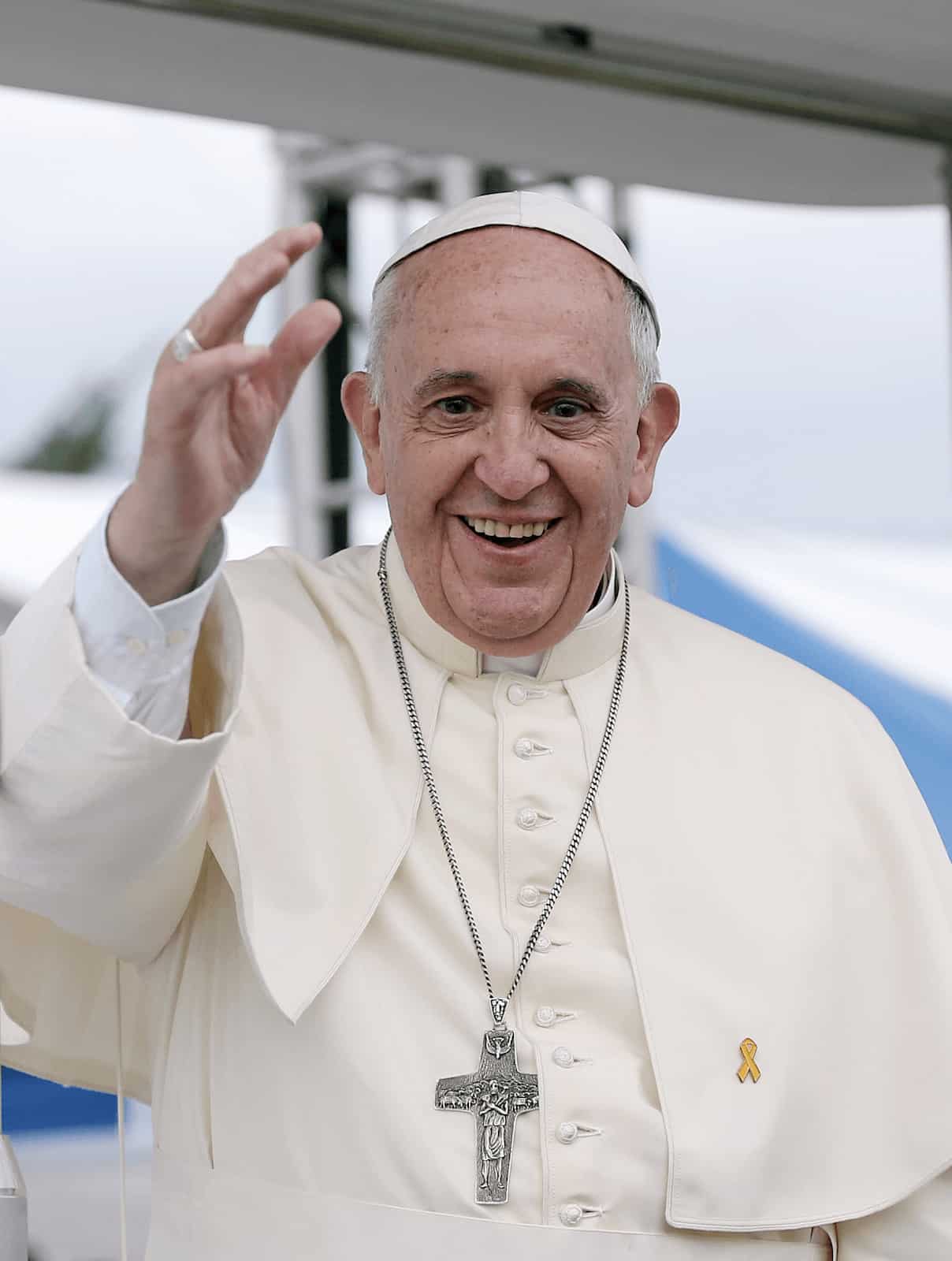 White smoke billowed from the Vatican, indicating that the College of Cardinals had cast their ballots. Jorge Mario Bergolgio, a Jesuit priest from Buenos Aires, had been elected pope. He selected his papal name in honor of Saint Francis of Assisi, who venerated nature and poverty. This unique choice reflected Pope Francis’ unconventional background and views. He made history as the first Jesuit pope and the first one from the Americas. He quickly became renowned across the world for his humility and his progressive stances on controversial issues. U.S. Ambassador to the Holy See Kenneth Hackett witnessed Pope Francis shake up the Vatican first-hand. According to Hackett, at a meeting with all the members of the Roman Curia (the administrative institutions of the Holy See), Pope Francis “laid them out straight. He listed 12 diseases [of] the bureaucracy, those people who were trying to climb the ladder to get up, and those people who were loose-lipped… he really ate them alive.” He fought to reduce money laundering and streamline the Vatican bureaucracy, fighting against centuries-old norms.

With over a billion Catholic followers world-wide, Pope Francis’ beliefs were immensely influential. On a visit to Brazil, he convened a staggering three million people. He encouraged European countries to take in migrants, called for peace in war-torn Syria, and advocated for global nonproliferation efforts. Despite Pope Francis’ profound influence, Hackett recalls his humility: “He lived in the guest house, not the apostolic palace. He drove around in a Fiat, not a Mercedes or a limo. He carried his own bag.”

Kenneth Hackett previously served as a Peace Corps volunteer in Ghana when the program was only five years old. Afterwards, he began working for the Catholic Relief Services. He stayed with the agency for forty years, eventually becoming CEO. He worked in Sierra Leone, the Philippines, and Kenya. In 2013, President Obama appointed him as ambassador to the Holy See. 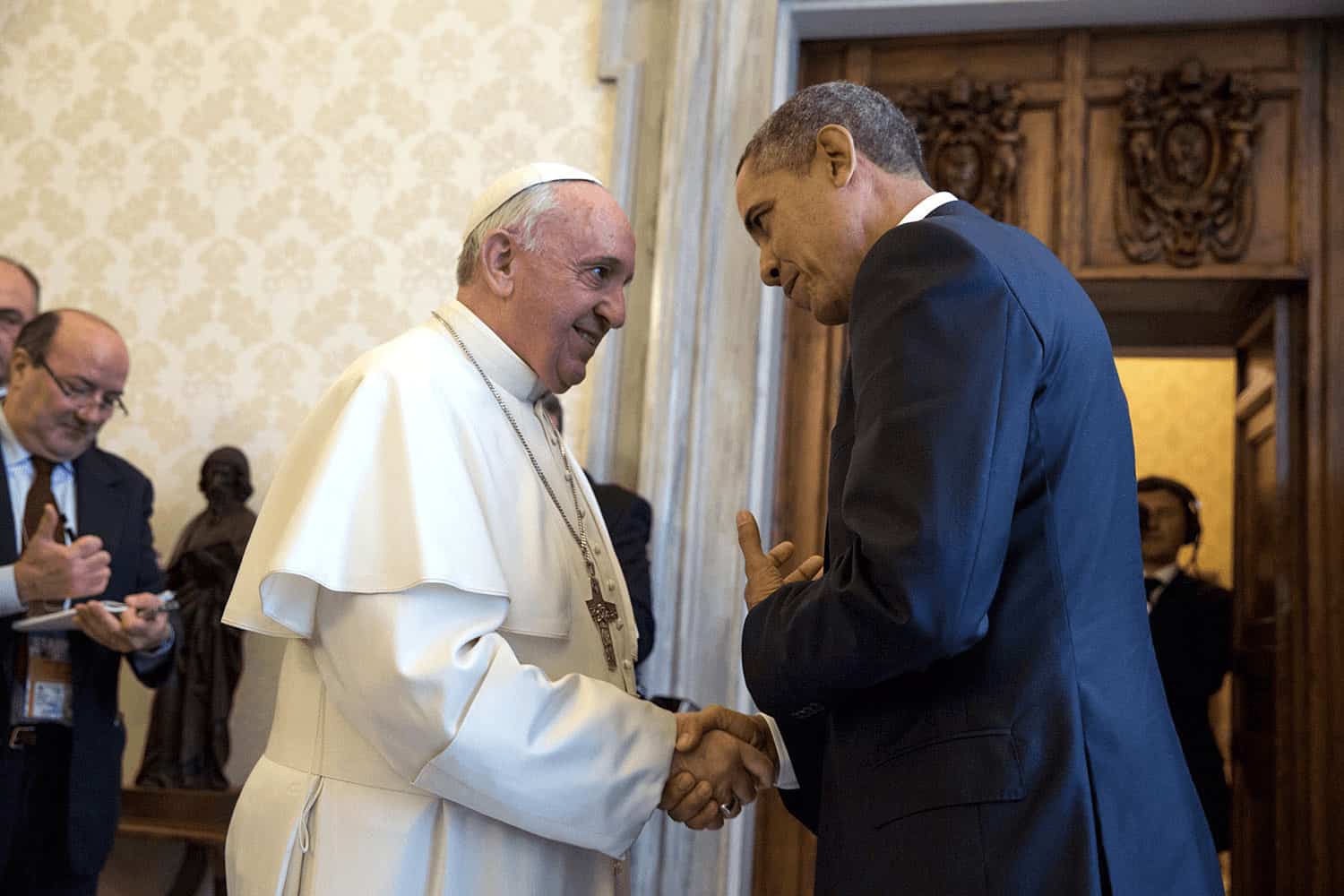 Pope Francis’ Policy Positions: As you may recall in 2012, I think it was in the summer of 2012, President Obama talked about a red line in Syria relative to chemical weapons…. If they were used again, that would be crossing the red line. And then come August 2013, there were valid reports that indeed, Assad was using chemical weapons on his own people. So, this was getting quite dangerous now, and the Obama administration was saddled with, “What are we going to do now? Do we bomb them?” And there was an article in the New York Times written by Vladimir Putin saying, “Oh, restrain yourself on Syria.” And then, Pope Francis comes out… and calls for a day of worldwide prayer and fasting for peace in Syria. This was directly focused on the Obama administration. And that day of fasting was to be September 7th . Well, I hadn’t gotten there yet, but I knew at that time I was in for some interesting doings once I arrived in Rome and took up the position as ambassador.

Q: [D]id you see that you were going to be in the position of pushing for war?

Well, I saw that I was in a position of explaining what the administration’s policies were, and in fact, the administration’s policy in last August of 2013, were unclear. And, when the Pope brings 100,000 people to St. Peter’s Square on September 7th, that’s noticed by the rest of the world. And his voice, and his positions were gaining considerable attention. In July of that same year, he had brought three million people to the streets of CopaCabana in Brazil for a prayer service. Three million people. Not a lot of heads of state can convene three million people….

[H]is voice, his positions, were gaining considerable strength…. He had only been in office for a few months. He came in in March of 2013. His stature had just grown considerably over those few months because his actions reflected the positions and the attitudes that he wanted to convey. For instance, in early July, he flew down to Lampeduza, the island off Sicily, where most [of] the refugees from North Africa, or those who had got to North Africa, were coming across and trying to get into Italy. The conditions were miserable. The Pope was trying to focus the world’s attention on those refugees and their conditions, so he went himself down there. And then two weeks later, he flies to Brazil, and on the last day of his trip in Brazil he convenes three million people on CopaCabana beach. So, it was obvious that this head of state has some gravitas. So, aware of that gravitas, when I see him calling the world to a day of prayer and fasting…for peace in Syria, I said, “Oh, this is going to be a big item on my agenda.”

Q: The immigration issue in Italy was right on your doorstep, wasn’t it?

It certainly was, and the Vatican was pushing a rock up the hill. The whole immigration issue in Italy and in Europe is front and center and Francis did not hesitate to call people in countries, particularly in Europe, to do more, to be more accepting. And we saw what happened in Germany as Merkel opened the door, she lost a lot of political support in various quarters in Germany. And the same is true in Hungary and Austria. In Italy more recently there has been a rise in two political parties that are basically anti-immigrant, so this is a hot issue, and the Vatican was paddling upstream on it in Italy.

“[I]t’s not transactional. It’s all relational. We don’t have any oil to trade, missiles to sell, guns to sell, crops to sell. It’s all about who you know and how you know them.” 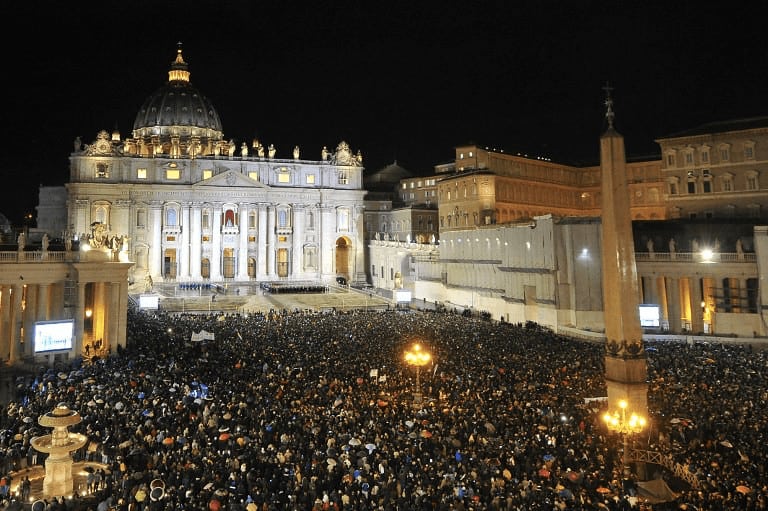 I did. More than a normal new ambassador coming in. I had been on a couple of committees at the Holy See over the years and I knew personally quite a number of people and coming out of forty years with Catholic Relief Services… That made it a little bit easier because one of the elements of how you work when you’re an ambassador to the Vatican was explained to me very early by the British ambassador. He said to me, when I asked, “Well, how do you go about relating to the different people here in the Vatican?” As a very experienced diplomat, he said to me, “Ken, it’s not transactional. It’s all relational. We don’t have any oil to trade, missiles to sell, guns to sell, crops to sell. It’s all about who you know and how you know them. So, spend your energy listening and develop [relationships] and then you’ll be successful.” And that proved true.

… [F]irst of all, the actual bureaucracy of the Holy See is not very large…. However, it is the church which has over two billion adherents around the world. That’s big. And their voice is amplified in many ways in different corners of the world. Secondly, while the systems and procedures in the Vatican are… how shall I describe them? They have been in place for a long time. They do things the same way in the Vatican as they did two or three hundred years ago in certain instances. So, to understand and glean the processes and how you go about getting information it takes awhile because there’s no handbook. Nobody [tells] you, “Well this is the way you do it,” and it’s all about relationships; that’s for certain. One of the things I found when I got there very early, one of the assistant secretaries had served there as a political officer four or five years previously, and she mentioned to me that there was something called WikiLeaks, which you are well familiar with. And some of her cables about the Vatican were leaked. She didn’t describe it in a deleterious way, but when I got to Rome, my DCM [deputy chief of mission] said, “We have some problems. There are many people [in] the Vatican who won’t talk to us because there were cables about them which came out in WikiLeaks and they were not favorable.” And indeed, that’s what I found initially, that there were certain people who would attend the meeting with you, but wouldn’t say a thing, and that’s a hard position to sustain, so I really had to work on that full-bore right off the bat.

… I had all kinds of relationships that I worked on—on the golf course, on the tennis courts, at dinners, at receptions. One of the issues that I found proved most valuable is when I knew they were concerned about something, and the something could be climate change, they were going to put out a new document on climate change, on nuclear non-proliferation, or Syria, or Libya, or Christians and other minorities in the Middle East. I would endeavor to find the person in the [State] Department who was [an] expert on those issues and invite them to come to the Vatican and brief at the appropriate level. That proved to be, I would say, one of the more effective strategies that we adopted.

“[H]e himself was a humble man who lives simply. He lived in the guest house, not the apostolic palace. He drove around in a Fiat, not a Mercedes or a limo. He carried his own bag.”

Oh, it was palpable. In his December 2014 discussion with all of the members of the Curia [the administrative body of the Holy See]… he laid them out straight. He listed 12 diseases, I think he called them, of the bureaucracy, those people who were trying to climb the ladder to get up and those people who were loose-lipped. I forget what the whole 12 were, but he really ate them alive. And the reaction to that was mixed. There were many who were at those meetings and said, “Yeah, we needed that” and others were upset by it.

He took on the financial situation in the Vatican head-on and that is still causing controversy. We signed an agreement on tax avoidance, money laundering, and trafficking of money with the Vatican; it was the first-ever agreement between the United States… It was not a treaty; it was something below a treaty between the United States government and the Holy See. It was part of the attempt that Pope Francis was making to clean up its finances, improve accountability and transparency as well as change the systems that were needed to affect that transparency and accountability. He also saw the need to change people.

And what was interesting, and it’s not unique in the Vatican, it exists in other countries, is that your grandfather used to work in the Vatican Bank. Your father worked in the Vatican Bank, and now you’re working in the Vatican Bank. There’s many of those types of situations that historical precedence and presence of different families, I think is a real negative element in trying to clean things up. But Francis is trying to do it. He also wanted to streamline the operations among Vatican offices so he combined a number of offices… So those are just some of the issues that he was up against in trying to improve things.

But what was good to see is that he himself was a humble man who lives simply. He lived in the guest house, not the apostolic palace. He drove around in a Fiat, not a Mercedes or a limo. He carried his own bag. He showed up one day downtown in Rome at an optician getting his new pair of eyeglasses and traffic had to stop in the street there was so many people wanting to get a view of him in the optician’s place. He is a very simple, humble leader and that’s why in December or late November 2013, Time magazine made him “Man of the Year” and subsequently many European publications did the same kind of thing.